Long lost footage of the destruction caused by the 1931 Hawke’s Bay earthquake has been saved for posterity after turning up in an Upper Hutt garage. 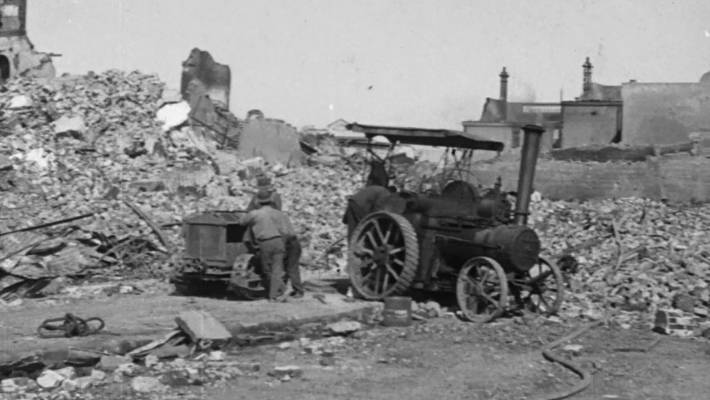 The footage was taken by freelance news cameraman Thomas Henry Whetton, who was active in the 1920s and 1930s. It has been preserved by the national audiovisual archive Ngā Taonga Sound and Vision.

Altogether 70 reels of film taken by Whetton and stored in cans, which had rusted, were found by members of Whetton’s family, the Ministry for Culture and Heritage said. Of the 70 pieces of film, 38 were of New Zealand origin, while the rest were foreign films.

The film cans were unlikely to have been opened for nearly 80 years, and the lids needed to be prised off.

Ngā Taonga was told of the films in late 2017. A detailed inspection of the contents took up much of the first six months of the preservation process. Repairing the items also took about six months.

All the footage had been looked at, but the process of scanning it had just started, Ngā Taonga said. “As it is scanned and viewable we will find out more information when we can better see details and action, but the basics are all done.”

Footage of the earthquake – just a small part of the content on the Whetton film reels – is a reminder of the ferocity of the event and the stunning extent of the damage it caused.

The official death toll was 256, with a further 593 seriously injured, GeoNet said. The impact was greatest in Napier and Hastings, with uncontrollable fires adding to the vast scale of the destruction.

“Preserving film, video and sound for future generations is a race against time,” Ngā Taonga acting chief executive Honiana Love said. “In many ways it’s a miracle that we were able to salvage anything from the rusty cans of the Whetton collection, and it’s a triumph that we succeeded in saving so much.”

The discovery of Whetton’s work highlights the need to have old recordings preserved. A Ngā Taonga spokesperson asked people who had material of interest to phone the archive before taking it in.

Part of the issue was that nitrate stock was flammable and needed to be kept in the right conditions to minimise the risk of it catching fire.